EARTHMOTHER IN BOTANIC GARDENS SYDNEY, NEAR THE SYDNEY OPERA HOUSE

"Earth Mother by Helen Leete (1993)
This sculpture was inspired by the forms and textures of the landscape and natural rock formations. It is made from a complex mixture of sand and earth, built up in layers
which imitate the way rock formations are laid down, consolidated and carved by
the elements. Earth Mother is a visual metaphor for the spiritual and physical connections between humans and the earth."

This Earthmother was first exhibited at the Art Gallery of N.S.W. in 1993. It was short listed for the Wynne Prize, and one of only two sculptures in the Archibald/Wynne/Sulman exhibition. There it was admired by the Director of the Botanic Gardens, Professor Carrick Chambers , so after the AGNSW exhibition, it was moved to the Royal Botanic Gardens. The site chosen for it was a rocky outcrop, above farm Cove, near the Opera House Gate. For several years, until the trees below the rock grew tall, it could easily be seen from the Opera House.

This is because, CONCEPTUALLY THESE LANDSCAPE FIGURES ARE VISUAL METAPHORS FOR THE INTERCONNECTEDNESS OF ALL LIVING FORMS WITH THE EARTH ITSELF.

They suggest something of ancient consciousness, common to all mankind; of the universal and archetypal relationships to the Earth Mother, Earth Goddess or Earth Ancestors. Of man's psychic need for contact with the earth. The hollowed out caves and arches can be interpreted as man's first homes, caves in the earth itself, symbols of shelter and refuge in an insecure world.

Amazingly, even children intuit this: one small boy said, as he sat in the inner circle, “I feel safe here. It is like a sanctuary!”

Several people have commented that the arches, and the interior spaces formed by the arches, echo those of the Opera House. This is quite serendipidous as it was created without this site in mind! 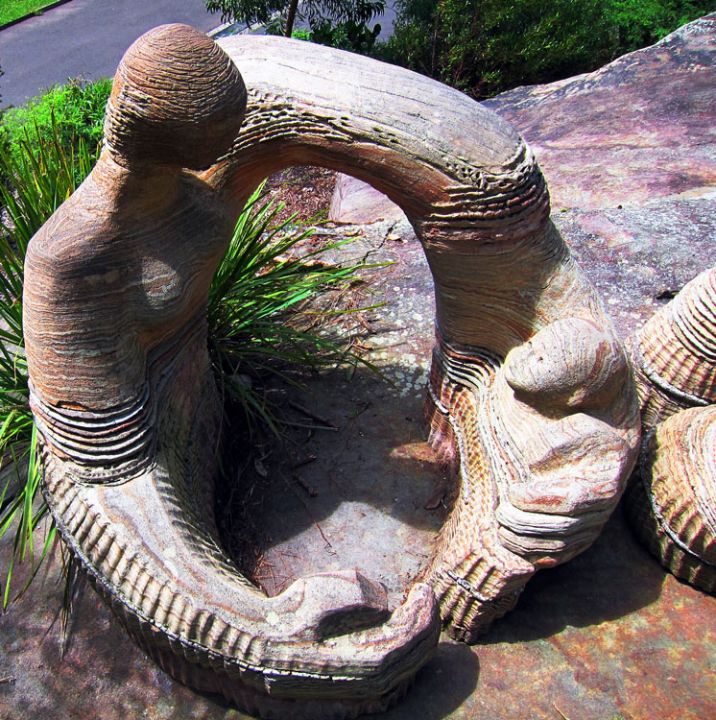 There has been a great deal of feedback over the years, on other websites, letters emails etc
e.g. Some short examples below. Longer ones include a long essay sent to me by a professor, submitted by one of his law students!

“I am just writing to say thank you for your beautiful sculpture Earth Mother at the Botanical Gardens. I visited her yesterday and could not resist the temptation to climb into her circular arms and be held. (I hope you do not mind this kind of interaction with your pieces – I do not intend to be disrespectful of your work.) And what a lovely experience it was to return to being a child just for a few minutes and to be held by her warm arms with my head on her chest hearing my heart beat with hers. Purely magical and so very comforting. Thank you for providing me with that experience.


“.....that reminds me of a touching moment with the Earthmother in the Botanic Gardens.
Some children, who had been singing or rehearsing in the Opera House, were clamouring all over the sculpture. I remember they had highly polished shoes and were slightly scuffing the sculpture. Then one young boy, about 10 or 11 sat in the circular SPACE, enclosed by the mother's arms, hugged his knees, and said "I feel safe in here. It is like a sanctuary!"

“I’m so glad you like people interacting with your sculptures. Earth Mother has such a lovely energy to her I didn’t think you would mind. That little boy is right she is a sanctuary. I love lying on rocks and the ground to feel connected with the earth but to actually be embraced by rock is really amazing and strengthening. Your work is very inspiring to one who believes in the goddess and the earth as mother.”

I just wanted to let you know how much I enjoyed your sculpture 'Earth Mother' in the botanical gardens today. I am an artist, painter from London, visiting my family here. I went for a walk today through the botanical gardens today - one of my favourite parts of Sydney - and came across your inspiring work. I enjoyed the way it connects with the earth, reflecting, through its form and structure, our primordial nature. I'm always very inspired by an art which reminds us of who we really are instead of who we think we are. Good luck with you work.

It belongs in the landscape, but even in the Art Gallery of NSW it proved popular.
While there, as part of the Archibald/Wynne prize exhibition, one of the busiest in the year, one the volunteer guides contacted me to say:
“It is the most popular work in the exhibition. I think the gallery should buy it.
Many, many people said they thought the gallery should buy it.”
One of the Gallery staff security men, “Your work was so popular, everybody was so interested.”
Some private buyers also phoned and wanted to buy it .
Inevitably there were detractors too! I only heard of one, at the function at AGNSW to celebrate the Archibald, Wynne etc.
An “art establishment martinet” walked up, and proclaimed in a very loud voice, “What a WONDERFUL piece of stone. What a pity to make a mother and child of it.” Of course I had not violated any wonderful existing stone at all, I had created it from lifeless, formless piles of molochite, shale, felspathic rock, alumina iron oxide etc.
I did not feel the need say anything.

Another "Blog" This time the rationale for a conceptual installation. Would like to do "Essence Precedes Existence," but rather long. Might need a separate site for it!!

2.
DERRIERE-PHOBICS GET A BUM STEER (see images under Conceptual installations)
An installation dealing with prejudices and preconceived judgments about the body.
It has various layers of meaning, and can be deconstructed in several ways.
Here are just two possibilities:
(a) It could be that the Phobics have been given a “bum steer” because they have been led to believe that bottoms are somehow “rude”, there is something wrong with the human body. It does not stop them looking, they look all the more obsessively, but they do it furtively, surreptitiously, with their hand over their eyes.
(b) Or the opposite: The little Phobics, like all of us, exist in an environment where artists and the cultural establishment bombard us with images like cans of shit, buckets of urine, religious icons drowned in piss, blood pouring from cabinets. Images of the nude are thrust at them, not as things of natural beauty and innocence, “nuditas virtualis” but as symbols of raunchy sexuality. They cower and cringe at such skewed interpretations and values.

One inspiration for the concept came from an encounter In the 19th C gallery, of the Art Gallery of NSW: A young boy walk past the two bronzes there, “Retaliation” and “David,” obviously trying to avert his eyes. “Why?” I asked him.
“I am not allowed to look at things like that.” “Why not?”
“Because they are rude.” “Why are they rude?”
“Because they have bare bottoms. I have been told that bottoms are rude.”
I found his answer terribly sad! Instead of looking at the two bronzes openly and freely, he was forced to look furtively and guiltily. Those bronze sculptures are NOT rude, just very conventional 19th C works! I found myself thinking, “Poor child, he has been given such a bum steer!”
It also reminded me of a scene in a Fellini movie. A group of boys are watching a woman dancing naked on the beach. They are clapping and dancing and enjoying themselves. Then a priest comes yelling and shouting telling the woman to put her clothes on. The narrator voice over says, “ At that moment the children were spoilt: until then they were innocent, beautiful.” Children, are naturally comfortable with the human body UNTIL someone indoctrinates them with prejudices.

But, it seemed the young boy in the Art Gallery was not alone! At a one man exhibition at the Holdsworth in 1990 the curator loved the Phobics but rejected the derrieres. Exactly the same thing happened at Sculpture by the Sea, only the Phobics were accepted.
So the whole group had to wait until I had a one man exhibition based purely on Judgment. Three installations, “The Judgement of Paris” based on the Greek myth, “Two Women in Love” challenging the prejudice against homosexuality, and this one! Some of the images are from this exhibition. They then won a prize at an outdoor exhibition in a rainforest.

It was a fun exhibition, lighthearted, ironic and interactive. Humour is a wonderful way to widen the context, to encourage a more open hearted way of seeing the world!

DEFINITIONS:
1. PHOBIC: To have a phobia, an IRRATIONAL fear or dread of something, to compulsively avoid that thing or idea. (e.g. to be claustrophobic is to want to avoid enclosed spaces)
2.” TO GET A BUM STEER” To be steered in the wrong direction, to be given wrong advice
3. DERRIERE: French for behind.
Next
Previous